The Two Goals of Overhead Allocation

In the process of allocating Overhead Expenses to on-going projects, we want to accomplish two goals.

In an allocation scenario which divides overhead costs for the month between the projects current in that month, it may be legitimate to load all the managerial, office, and support costs for the resources of the company, resources which were needed by the last three projects and will be needed again for the upcoming projects, onto the one small current project. But it is not reasonable. The additional burden placed on the current small job would make it appear very unprofitable, and skew the financial results of the large jobs, past and future, as well.

Second, the actual allocation process should result in the constant refinement of an Overhead Allocation Factor which is closer and closer to perfect. In the previous sections, we discussed the use of historical results by which the factor is established, and that in many cases the factor is established using historical data from the previous year. The two models being developed here make monthly adjustments to the Factor, and could easily be adapted to make even more regular adjustments.

The three previous sections covered a general discussion of: 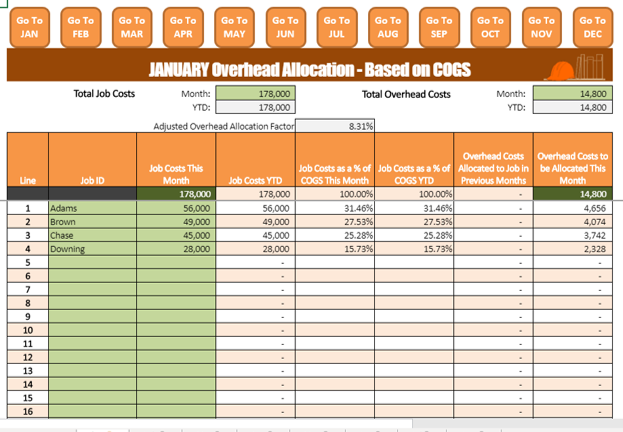 The first model we will address is a model based on Cost Of Goods Sold, and looks at the ratio between Direct Costs for an individual project and the total of all Direct costs for the period, in this case, for a month. Once that ratio is established, the ratio is applied to the Indirect, or Overhead Expenses, for the month. The rationale in this model is that we can expect the same ratio of Direct Expense to pertain for Indirect (Overhead) Expense.

It should also be noted that the model shows analysis month by month for a twelve-month period. For demonstration purposes, I have taken the first month, the third month, the sixth month, and the twelfth month.

The monthly amount of Overhead Expense to be charged to the individual job is shown in the last column. That entry should be made in the General Ledger as shown and discussed in greater detail here. 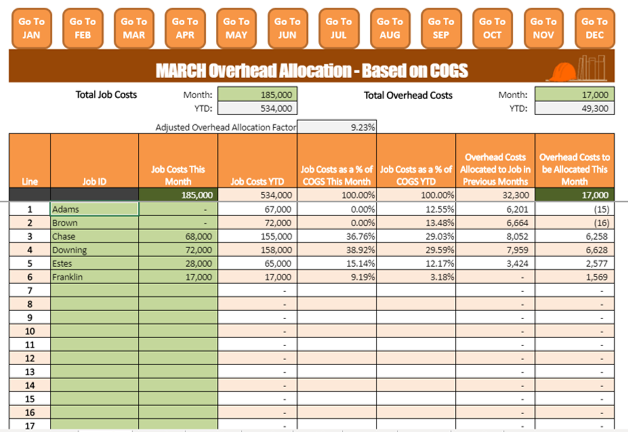 The entry procedure for each subsequent month is the same as the first month. Enter "Total Job Costs", "Total Overhead Costs", "Job ID", and "Job Costs This Month", and the model does the rest of the calculations.

The illustration to the right shows what the model looks like in the third month. The process is the same, but a couple of additional columns have been added. For tracking purposes, we have added a "Job Costs Year To Date (YTD)" column, "Job Costs as a % of COGS YTD" column, and a "Overhead Costs Allocated to Job in Previous Months" column.

The reason these columns have been inserted is that the model is "smoothing" the allocation numbers. That is to say, the model is constantly adjusting the direct cost figures to reflect each additional period, and the expenses attached to that period, recalculating the "Job Costs as a % of COGS", and multiplying the newly-calculated ratio by the total-to-date of Overhead Expenses. The effect of this is to smooth out unusual spikes and dips in monthly overhead costs by factoring in more iterations.

It is not imperative to understand the mechanics, as the results can be seen. Look at the first two jobs, 11-24 and 11-25. Even though those jobs have been completed and had no charges for the month, they are still adjusted in the final monthly calculations. Job 11-24 is credited $15.28 and Job 11-25 is credited $16.42 to adjust for the fact that the ratio of their direct costs to the Total Direct Costs changed during the month. Just for the record, the allocation amounts for completed jobs can increase or decrease each month, depending on the ongoing jobs. 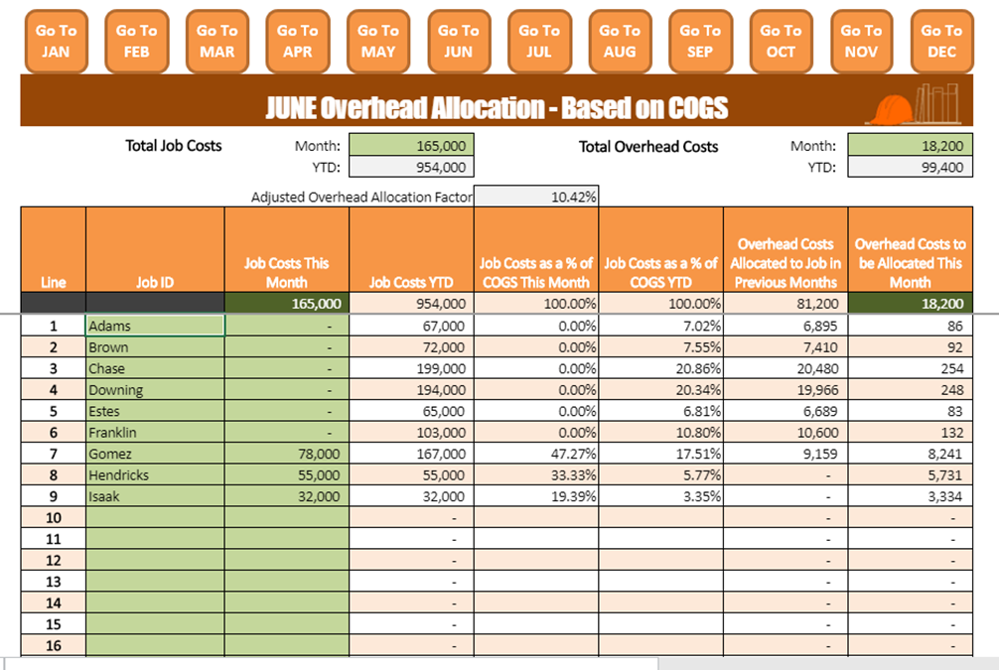 Each month, the entries are made and the calculations run by the model. The resulting entries to the Overhead Allocation and Job Cost accounts are suggested by the model. In the model to the right, which is six months into the year, charges are added to completed accounts to adjust the current project balances, and defend against unreasonable job cost entries.

The model is attempting to ensure that the Overhead Factor is always indicative of the current load. 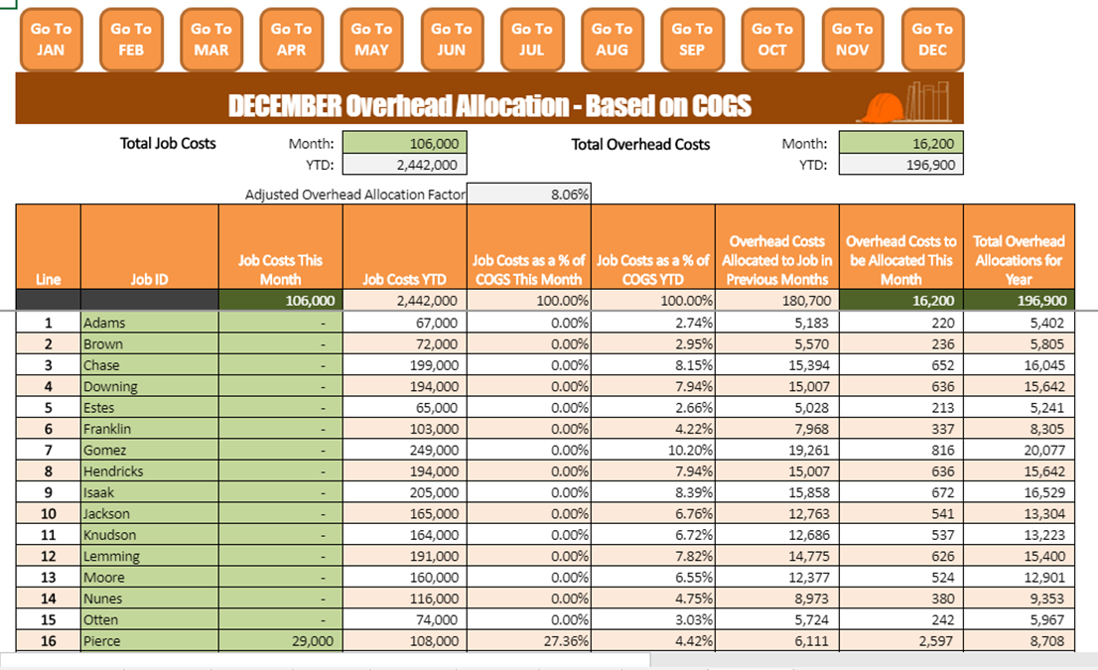 This jump in the overhead ratio is not an unusual circumstance, as the holidays reduce work days, the weather may shut down jobs, and employees go on vacation or are just generally less productive.

Recognizing that this is an unusual situation, the model factors costs back into previous jobs to spread the overhead load. The result is that you do not get a 15.28% Overhead Allocation Factor but an 8.06% factor to use in estimating. I have not included months 7-11 in this demonstration, but those months enjoyed a very beneficial relationship between the Total Job Cost and the Total Overhead Costs, suggesting that all assets were being used in a very productive way.

The reason this is important is that using the current, smoothed 8.06% instead of the 15.28% from the December results means a reduction in overhead load on a $350,000 proposal of more than $23,000, which is more than sufficient to lose the project.

If we know that our real load over the course of the year is 8.06%, we should be comfortable using that number for our estimates.

I wish I could say that the Smoothed Cost of Goods Model is the answer to the difficulty of Overhead Allocation. It provides some very useful information, and does appear to update the Overhead Allocation Factor in line with actual production.

However, it does have some drawbacks --

The Law of Large Numbers suggests that the more instances we have in our sample data, the better will be the results of our analysis. In this model, we are only dealing with twelve months, at the most. I think, if this model is adopted, that it would be useful to continue the analysis on an ongoing basis, without regard for the end of the year. The model could be easily adapted for that contingency.

The other drawback is the opposite side of the duration coin. If, for example, a new process were introduced into the production process which offered an enormous competitive advantage, the full effect of that advantage would take months to work its way into the analysis. While being able to price and win projects at an Overhead Allocation Factor which exceeds the reality is a good problem to have, it would still be important to know actual versus smoothed results in such a case. Having that knowledge would inform us about just how low we can go to win an especially attractive project.

Still in all, the Overhead Allocation Model based on Cost of Goods Sold offers some major benefits for Job Cost Allocations -

The download is available below. Use it and let me know what you think.

Why be concerned about Overhead?

Budget Projections based on Marketing

Overhead Allocation In the General Ledger